Standing in line is not one of my favorite things to do. And as I get older it takes a lot for me to even consider doing such a horrible thing. So it was pretty rare when Nate asked me to drive a few thousand miles and stand in line for a beer release, that I actually said yes. Especially given the fact that I have missed several local AZ Wilderness can releases which is practically down the road from me. But, after a long but fun road trip and night out at a few other breweries there I was. Standing in line, waiting for a beer. If you have never stood in a line for beer release, you should give it a try. Since you are randomly paired with those around you in line you do tend to start talking with other beer minded people and gleam some good info. One such thing was we should check out Phantom Carriage if we planned on heading toward Monkish.

So we looked it up online and sure enough it was just around the corner from Monkish and Smog City, so yeah why not. We missed the parking lot entrance and had to double back but we found it fairly easily. The building was pushed back and had a sign on it but it was hard to read behind the overgrown palms trees. 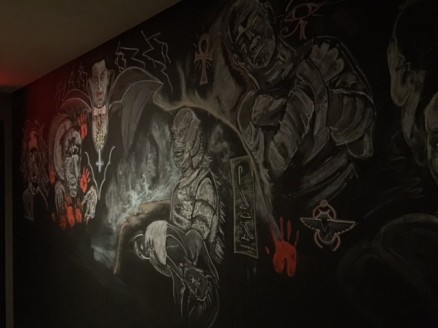 There was a sign on the side of the road with some barrels but we missed that too. Luckily, for us we found parking pretty easily, as the spot right next to the entrance was open. Like most breweries the parking was not great and you can tell from numerous posts online that this is pretty well known for Phantom Carriage. It was dark as night inside the joint. They were pumping some pretty heavy metal music and sporting a very early horror movie influenced atmosphere. We were all instantly hooked by it. They had a few murals on the walls of all the greats, Frankenstein, Dracula, the Mummy, Creature from the Black Lagoon. There swag was pretty heavy on the Lugosi and a logo that was a grim reaper. Their mascot if you will is a rat. They have a “Phantom Theater” where screening of old horror movies happen. There was a room off to the side that was I’m guessing for beer pairing dinners or some kind of club. The back portion of the space holds well over 300 barrels. 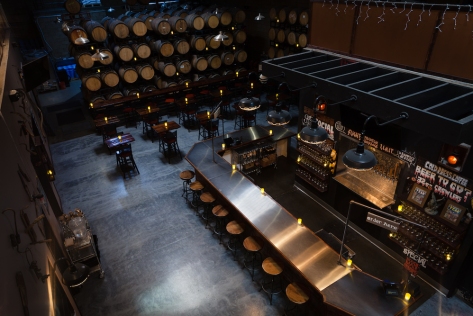 Over Head View of taproom

They had a handful of their own beers and some local area guest taps as well. Nate had the IPA of course and I had the Berliner Weiss called Broad Acres. They had a pizza special going on that day and all three of us ordered them and had no complaints what so ever.  Want to buy some t-shirts to go they sadly were out of my size. But, I just spent that money on an extra bottles to go. All in all this place was awesome. We really enjoyed the atmosphere and beers. Since it was the middle of the day it wasn’t too busy but there was a decent size crowd already. If you are in the area definitely take a look at Phantom Carriage.